Together Again With Julie Lindahl, our past Club President, April 9th 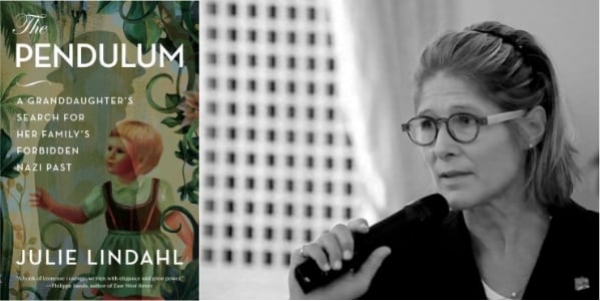 “In a work a lifetime in the making, author and educator Julie Lindahl (On My Swedish Island) writes of her awakening to the pieces missing in her history and the drive that led her to ask difficult questions about her grandparents and their roles in the Nazi SS. In a quest that takes her from her adopted homeland of Sweden, then to Germany, Poland, Bosnia and Brazil, she describes with grace and heart the people and places she’s encountered. From discovering unknown family in South America to accepting that wounds were necessary to open in order to heal, Lindahl shows how generations can suffer silence and shame throughout the years, and the importance of coming to terms with the truth in order to find closure…This powerful work reveals how people adversely impacted by the past persevere, even while living alongside the perpetrators who still carry prejudice.”
—Maria Bagshaw, Elgin Community Coll. Lib., for Library Journal

“In this powerful and solemn memoir, Lindahl (Rose in the Sand), who was born in Brazil to a German family, recounts seeking the truth about her grandparents’ Nazi past, which her family hid from her.  In prose that is formal, yet poetic and heartfelt (“While truth can be elusive, often staring at us from outside the rain-spattered window of our own perception, the failure to believe that it exists… is the seed of self-destruction”), Lindahl shares what she learned during seven years of research and travel. Many readers will be moved and find meaning in Lindahl’s journey to come to terms with her family’s past and process the guilt of inherited sins.”
—Starred Review, Publisher’s Weekly