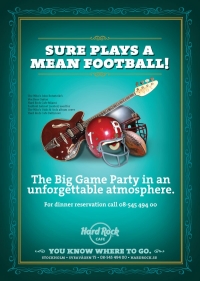 The Super Bowl is a special event in American sports, one of the most watched worldwide.  This year The American Club is participating in an event hosted by Hard Rock Cafe and Djurgården American Football.  The Embassy of The United States in Stockholm is also invited.

Cancellations must be made no later than 5 p.m. Friday, January 23, 2009. Reservations are binding thereafter.