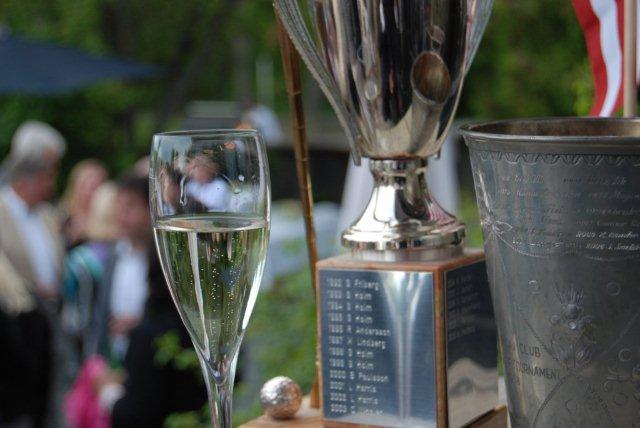 Our annual Club golf event is the second longest running in Sweden and draws a broad range of players, spectators and sponsors.  In 2013 the tournament was dedicated in memoriam to our President Emeritus, we welcome our members and their guests to:

The American Club of Sweden’s

In 1961 The American Club of Sweden Golf Challenge was started with a single cup for gross score (stroke play) sponsored by Pan American Airlines.  Continued today the cups have grown to include:

In addition, the usual best drive competition is awarded in honor of our late long-time member, golf enthusiast and tournament organizer for many years, Margaretha Isaacsson.

Golf grew in Sweden in the mid 1900’s and The American Club of Stockholm (so-called at the time) had many golfers and regularly scheduled golf outings.  Started as a tournament for members only, guests have been invited over the years.  Golf is the excuse for the day but in many years there have been charity causes and parties following the Challenge that lasted long into the night.  There is one written account of participants partying until there was enough light again (easy in a Swedish summer!) to play another round of golf in the morning before going home!

The tournament lasts uninterrupted to this day and as such it is the second longest running tournament in Sweden and carries both the cups and traditions bearing this long legacy.

Read more about the history of the tournament in the cover story on the Challenge’s 50th Anniversary from the Club News Bulletin in February 2010.

A more updated and complete list of the course and cup winner history can be found here.  To learn about the tournament’s namesake since 2013, see our page on Gunnar V.H. Rasmussen.